Hard to Pin Down: Ion Grigorescu 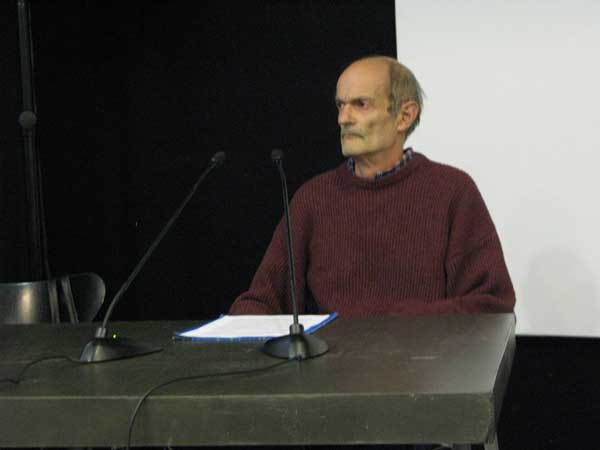 Ion Grigorescu is a painter and media artist. Ever since his debut, Grigorescu has been active in the public space and took part in many group exhibitions. Grigorescu has worked extensively with performance, which he documented through photos and S 8 mm films (most of them in black and white). In these documents Grigorescu deformed the film image with the help of superimposed circular lenses (Body Art with Three Mirrors, photo, 1974, Mimicry, photo and film, 1975). During Ceauşescu’s regime, Grigorescu performed a number of secret political happenings. Among these were Election Meeting (1975) and the film Dialogue with Ceauşescu (1978) in which the artist appeared alternatively in the dictator’s role–wearing a mask over his face–and in the role of a common citizen who wants to ask the president questions. After 1990 the artist staged a spectacular comeback with a series of personal exhibitions and happenings at performance festivals in Bucharest, Timişoara, Venice, Vienna, and Amsterdam. His body-focused work from the 1970s has been rediscovered and Grigorescu is now unanimously acknowledged as a highly relevant contemporary artist.

Ileana Pintilie: As an artist, you are hard to pinpoint not only in the context of contemporary Romanian art, but also in the context of Central and Eastern European art. You started your work in the early 1970s during the Communist period. You have experienced the barrier of censorship and you have had difficulties to exhibit what you wanted (this made you withdraw from public life in the 1980s). Therefore, an important part of your work–photos and films on body performance–remained underground, unknown to the public at the time. Even if the belated rediscovery of this work brought you national and international recognition, you were always displeased that the perception of your work was fragmented rather than holistic. Looking back, how do you perceive your work today?

Ion Grigorescu: It’s not really like that. A holistic approach was attempted at the MAC in Warsaw, with a few translations from the Diary. But no coherence was reached because the curators didn’t have the curiosity and the patience to search for it. This may sound surprising, but coherence should not be looked for in the work itself but rather in the working style. I began as a public artist, but my debut actually consisted of critical essays on art and psychoanalysis, sports, and yoga. As a visual artist, I understood that art was prone to kitsch, so art had to be given up in order to avoid what I thought were unavoidable future mistakes. So I gradually gave up several areas, approaching them again later from a different angle. Transformation is specific to art, which is indifferent to perfection. By expanding this method to other domains–even or especially to religion–I offered something that could be said to belong to art. In other words, I made sure I was protecting myself from accusations of unprofessionalism.

IP: Would you say that these photos and films stem from the general context of your creation, or are they a separate form of creation with no direct connection with the other works you were exhibiting in public?

IG: The selection was made by my critics. I went along with them. Had they praised me, I would have abandoned them. When someone destroys something I have done, I try to fix it. After all, I can fix it in the first place, because the work of art has something independent, insolent, offensive, and aggressive, especially when it’s finished–not while it’s being made. That’s why I prefer performances–live art–because they are experienced in the present moment, like life itself.

IP: In the context of both Romanian and international art, the perception has been reversed; your public work from the 1970s and your current work after 1990 is ignored. The emphasis is placed almost exclusively on the work born in the intimacy of your studio during the isolated period of communism, with the rudimentary technical means available at that time. How correct, culturally speaking, would you consider this approach?

IG: If you refer to my rudimentary “approach,” it should not be criticized simply because it dates back to “that time.” I know people who gave up entire projects because of technical demands. Ilie Pavel, on the contrary, believed strongly in the technical powers of the work of art. I thought a solution could be found to convey a concept. If you refer to most curators’ obedient pursuit of what is fashionable in art–refusing to bet on anything outside of the mainstream–I think that’s wrong. A curator is like an artist; he who doesn’t dare doesn’t exist. The curator is one of the many amateurs in this world.

IP: The reception of your work is difficult because it is profoundly cryptic character and has a tendency to hide, typical characteristics of the communist period. Some critics and curators can’t interpret this work because they do not know the political and social context that triggered it. Still, can you recognize yourself in any of their interpretations or exhibitions?

IG: Yes, especially in the negative ones, because they are more focused on  details, and because they set me thinking. Then come those who state things that are far from my intentions, such as Anders Kreuger’s point of view.   He first selected my work for an exhibition called Remedy for Melancholy, and then, during a conference, he compared me to the poet Mandelştam. Those who understand me have written reviews that were constrained by censorship (Ion Frunzetti, 1974), or fragmented (Coriolan Babeţi, 1991; Ileana Pintilie in “Actionism…,”; Nuno Faria, 2005). In terms of exhibitions, I would name the Artra retrospective (Milan) and the Warsaw exhibition, where I chose the works and then had my choice confirmed by the curators (Ruxandra Balaci, Marco Scotini, Kathrin Rhomberg). I can’t help discovering myself in criticism, as I feel these works belong to me. The context is like a seal that sticks to me (the exhibitions Prologue, Double Life, Out of Objects, Subversive Practices).

IP: I noticed a certain continuity in your work, a link between various periods, recurrent themes, and motifs.  What are your most recent interests?

IG: Somewhat artistic are the dream diaries, which I am very preoccupied with. I’m not yet sure how I can share them with other people. Meanwhile, I’m working on the catalogue for an exhibition praising agriculture and the power of the poor to survive even in the most precarious situations.

IP: You have organized many exhibitions and you have great curatorial sense.  From this position, how do you relate to your own work?  In your view, what would be the logical steps if you were to organize your own exhibition?

IG: For me people are the last step in the process of putting forward a message or developing an expectation. At the point where everything else is ready, nothing is extra, nothing is missing, and everything is in its right place in the curator’s mind. Post coitum animalia tristia. Once in real space I always feel as if I have the moral obligation to give up everything I have expressed. I feel a void around me as if I need to start from scratch, but then everything comes back to life, the way winter turns into spring. Catalogues are necessary because the connections between the objects are not repetitive–that’s a delusion. When a catalogue is very different from its exhibition, I am proud of myself and feel that I am free to fill a future that no longer starts from scratch.

IP: You are often invited to take part in various international exhibitions. What projects for future exhibitions are you currently working on?

IG: Success empties me of intention, and I am reluctant to start exhibiting again–I make an effort not to repeat myself. But things do repeat themselves as I am asked to come up with the same things. I don’t understand why they want the past when I am so focused on the present. With all due respect for younger curators, I always feel as if I am supposed to shock them with new things; I know they don’t understand me, and they pretend they don’t see certain things. Looking at it from this perspective, it seems I’m right, but I’m the only one responsible for it. Rejection stimulates me more than anything.

Ileana Pintilie is an art historian and art critic. Her books include Actionism in Romania During the Communist Era and the volume Mitteleuropäische Paradigmen in Südosteuropa. Ein Beitrag zur Kultur der Deutschen im Banat (with Roxana Nubert). She has also published many articles and essays on contemporary art in Romania and abroad in international catalogues and volumes. In 1994 Pintilie won a National Award for Art Criticism. Pintilie is a contributing editor of ARTMargins. 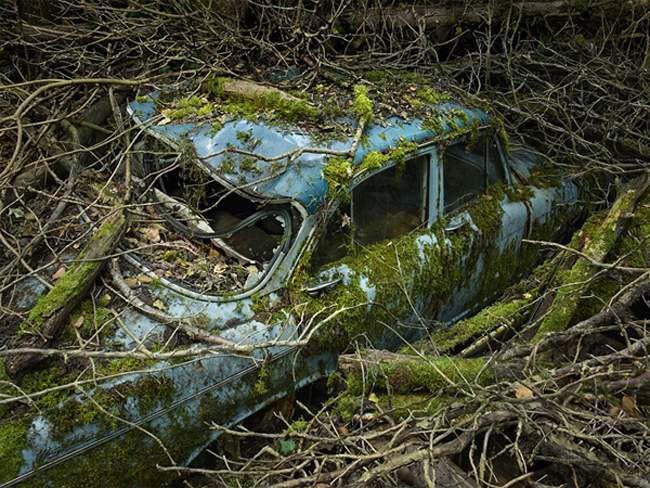 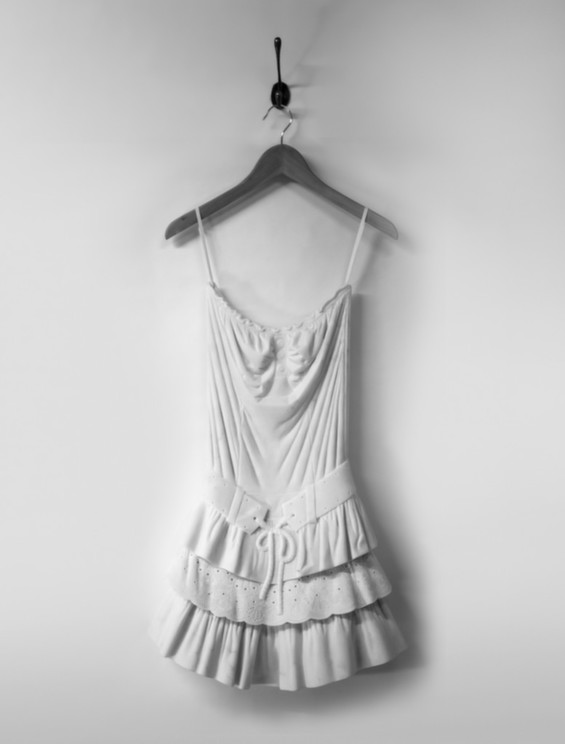 Airy Dresses By Alasdair Thomson Are Carved From Marble