Thomas Hirschhorn conceived a large-scale installation that completely fills the pavilion of Switzerland in the Giardini di Castello. The title of the exhibition is Crystal of Resistance. It runs until November 27, 2011.

The artist set up a website with extensive information about the exhibition, including statements, sketches, video, book references, related texts, press articles, etc. The site will be online until two months after the closing of the Biennale. 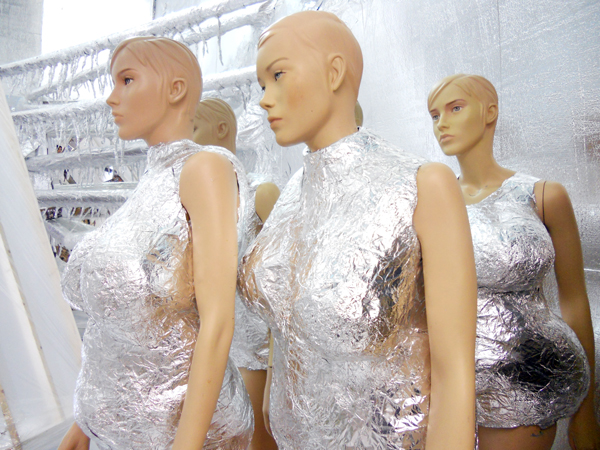 With Crystal of Resistance I want to produce a work that is irresistible. This can only happen if I succeed in creating a work out of my innermost self, without confusing – as it is usually done – the inner self and ‘the personal’. I can only reach the universal if I risk conflict with my inner self. ‘The personal’ doesn’t interest me because it’s not resistant in itself, it is always an explanation – if not an excuse. My work can only have effect if it has the capacity of transgressing the boundaries of the ‘personal’, of the academic, of the imaginary, of the circumstantial, of the context and of the contemplation. With Crystal of Resistance I want to cut a window, a door, an opening or simply a hole, into reality. That is the breakthrough that leads and carries everything along.

CHILDREN AT THE RHONE GLACIER

What prompted me to work with crystals was an experience I had 15 years ago. It was on the Furkapass-Road car park, below the Rhone glacier, I saw some children who had spread out some crystals on a piece of cardboard – most likely crystals they found themselves – and were selling them. It was a simple, wonderful and universal picture, which impressed me. The same thing could have been done by children in China, Russia, Mexico or anywhere in the world. Since then I’ve wanted to do something with crystals some day.

CRYSTAL AS A MOTIF

With my work Crystal of Resistance I want to give a form that creates the conditions for thinking something new. It must be a form that enables ‘thinking’. That’s how I see the mission of art: To give a form that can create the conditions for thinking something that has not yet existed. With this form I want to create a truth, a truth that resists facts, opinions and commentaries. It is not about ‘my truth’, but about truth in itself. In order to make contact with truth, to confront truth and to be in conflict with it – conflict in art means: Creating something – I need a motif. That motif is ‘crystal’ in Crystal of Resistance.

Crystal is the motif – but the motif ‘only’ – of the form of Crystal of Resistance. Crystal is not the theme, nor the concept nor the idea of Crystal of Resistance. The motif is an assertion, a ‘setting’ and the motif is love. As a motif, ‘crystal’ is the dynamic which links and which puts light – a new light – on everything. It sheds light on its own meaning, its own time and its own raison d’être. The ‘crystal’ motif helps me point out one or several facets, because it’s only as facets – as a partial vision – that truth can be touched. ‘Crystal’ is the motif I decided upon, out of love for its beauty, for its rigor, for its power and for its openness. I, myself – must be open to its grace and its universality. I will consolidate and fix my form with the ‘crystal’ motif, I will strengthen and determine my form with the ‘crystal’ motif.

I am not afraid of resistance, conflict, contradiction or complexity. Resistance is always connected with friction, confrontation, even destruction – but also, always with creativity. Resistance is conflict between creativity and destruction. I want to confront this conflict in Crystal of Resistance. I am myself, the ‘conflict’, and I want my work to stand in the conflict zone, I want my work to stand erect in the conflict and be resistant within it.

THE FOUR PARTS OF THE FORM AND FORCE FIELD: LOVE, PHILOSOPHY, POLITICS, AESTHETICS

In the work Crystal of Resistance, the crystal is the LOVE part of my form and force field. The crystal stands for the universal, the ultimate and for the absolute. The crystal stands for beauty itself. I am thinking of someone. I am thinking of a child, a girl who finds her ‘own crystal’ – perhaps her first – she finds it herself or receives it as a gift, and – for this girl – it’s the most beautiful crystal, and to her, it will always remain the ‘most beautiful’! That’s why each crystal is for me the ‘most beautiful’. This is the LOVE part in my form and force field. I know that there are different qualities and that these quality differences can be explained. I am interested in the ‘beauty’, not in the ‘quality’ of the crystal. ‘Quality’ has never interested me and to me it’s an exclusive and empty word and I decided years ago to always follow the ‘guideline’ in my work: “Quality = No! Energy = Yes!”. Because clearly, beauty is not subjective – beauty is absolute and universal.

In Crystal of Resistance the part POLITICS questions: How to act? How to work? With and under what conditions? I want to work in necessity, in urgency and in a panic. This should be understood as: Panic is the solution! That’s the POLITICAL. Art reaches beyond solutions,

art can confront problems, art is the problem and art can give form to the problem. There’s no solution to figure out – on the contrary – the problem must be confronted. And this is only possible in a panic. Panic is what gives form and this form is art. Therefore panic is a necessity in art.

The AESTHETICS part consists of the questions: How does the work look? What visual appearance does it have? What materials and what colors come out? I want my work Crystal of Resistance to be an indestructible and earthly dwelling of the gods ­- as the cave of the giant crystals of the Naica Mine in Mexico. I want to create a place that is so strange, so entirely from myself – only from myself – and so distinct that it becomes universal. I want to make a large, dense, highly charged, luminous and meaningful work. There will be many elements to see, there will be ‘too much’. It has to be ‘too much’, not because it is important to get to see everything or spend a lot of time looking, but ‘too much’ so that the things do not lie. I want to give form to the thought, that truth can be shaped out of facets and that truth can be touched only in a non-unified scale.

With the AESTHETICS part of my form and force field I can create a frontal and bi-dimensional work in the available space. A work that doesn’t allow to ‘step back’. With my AESTHETICS decision there is no possible overview, no distance and no illusion of detachment. This is what AESTHETICS can do. This is what I – in full blindness and full speed – want to assert and ‘hold high’.  It’s with this AETHETICS that I want to insist.

I want the work Crystal of Resistance to be experienced as something autonomous. It therefore has to be inside a recipient or an envelope in order to make clear: This is a time-limited work. I’m thinking of a skin, a shell or a geode. I’m not thinking about altering the given exhibition space and I’m not interested in working ‘against’ or ‘for’ the existing architecture of the Swiss Pavilion. I work with the space that exists. It’s not about ‘negating’ an exhibition space – it’s always about how the work asserts itself in the space as something autonomous. What is important to me is to use the available exhibition space as a container for my work, I want to create the conditions, which make it clearly understandable, that the space is the shell which contains my work. 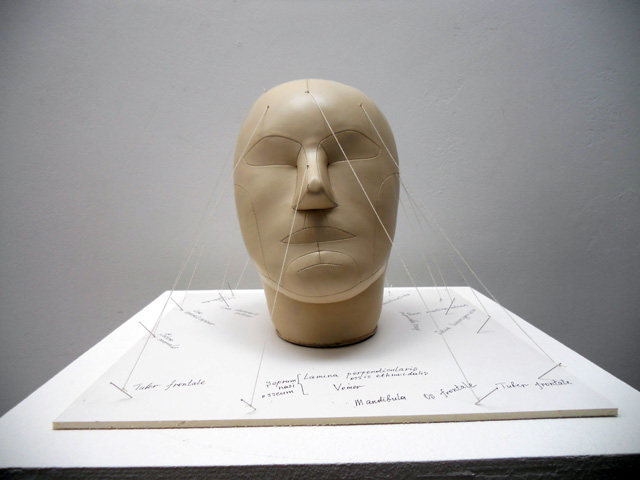