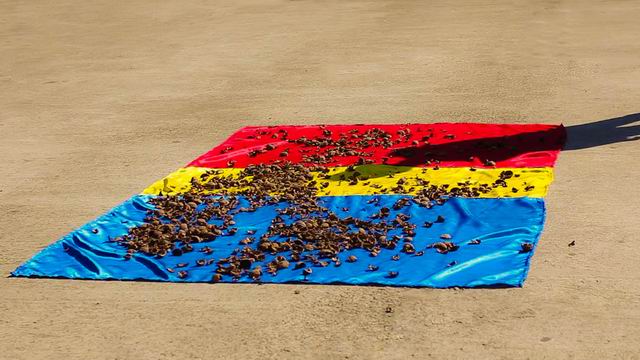 Performance “Penitence”
The Romanian flag which consists of the primary colors, lest the original amount of yellow, considerably narrowed intentionally in order to emphasize the “stolen goods” of the nation by it’s own co-nationals. Over the flag I placed nutshells as reference to the medieval punishment for of kneeling on top of them (this was used by monks, but also in the scholastic environment). I transposed this situation of the young Romanian generation over the flag (the punishments, the old overwritten rules and regulations), not as an act of self-pity, more as an act of awakening towards patriotism and self-trust for the struggle to win over the future for the generations to come.
~In memory of the victims of the revolution of 21 December 1989.~