Romanian Art from the 80s and 90s in Close Up 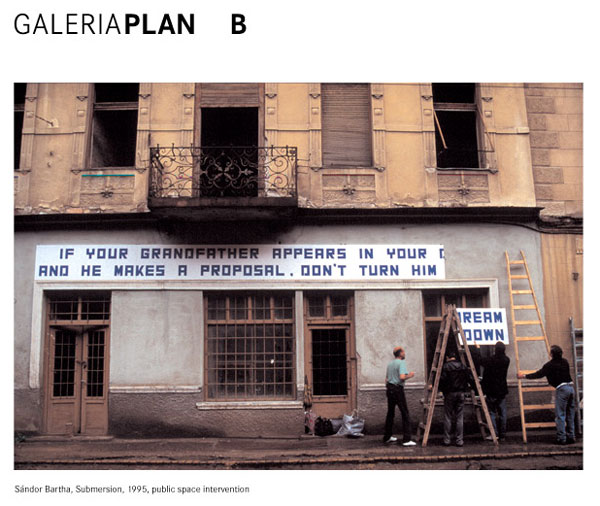 When History Comes Knocking: Romanian Art from the 80s and 90s in Close Up

Galeria Plan B is pleased to announce the group exhibition realised in collaboration with curator Judit Angel, concentrating on the experimental direction of Romanian art of the 80s and 90s.

In the 90s the representation of Central East European art demonstrated a tendency to oscillate between exoticisation and integration, both trends based on a strategic concept of difference: either a priori presumed, thus serving exclusionist practices, or neutralised in an effort to bring East–West differences under a common, “European” denominator. Lately one notices the erosion of colonialist/self-colonising attitudes, the diminishing relevance of the East-West cultural conflict as well as the increased visibility of post-socialist countries’ art due to various international publications and exhibition projects.

In as much as the re-evaluation process of Central East European art of the 60s and 70s is slowly precipitating, the exhibition at Galeria Plan B concentrates on a new chapter, that of post-communist transition seen in the light of works of Romanian art from the 80s and 90s. The drama and spectacle that surrounded the Romanian revolution from 1989 establish it as a decisive turning point, yet the transformation process – even if scarcely visible on the level of Romanian society – had in fact begun earlier, finding expression in local thinking and attitudes, culture and art. Whereas non-official Romanian art of the 80s represented an „aesthetic alternative” to communist power, the task of the 90s was the legitimizing of the role of the artist within the framework of the „state of urgency” generated by the extremely rapid changes of the transition period. The frozen time and spatial isolation of the socialist period have been substituted by a time that is considerably speeded up, in which the deconstruction of old structures and the building of new ones represents a simultaneous necessity.

The exhibition at Galeria Plan B focuses on the experimental direction of Romanian art of the 80s and 90s, manifestations of which are discernible in various media and genre such as photography, video, installation, action and performance and digital art. The selection is motivated by the fact that the relationship between art and society is more accessible through these particular forms of art practice . Before 1989 this orientation – characterized by an experimental attitude towards creation and visual language, historical sensitiveness, personal mythologies and political message – benefited from minimum publicity; not being able to control subjectivity and linguistic innovation, the communist power considered them dangerous and refused to tolerate such manifestations. After ’89 and throughout the first half of the 90s, there was an explosion in the growth of artists working with experimental and new media. These art forms interfaced well with the “ad-hoc” demands of the local art scene: the artists’ need to express their sense of social and political responsibility, to establish communication with the public and to connect with the international art scene.

The exhibition does not seek to create an exhaustive reconstruction of the art of the period, nor is it based on a strictly documentary perspective. By bringing works of art to the foreground, and by developing the connections among them – fostered by groupings around themes such as experiment, city, history, memory, individual and collective responsibility, artist, studio/laboratory – the curatorial approach proposes a re-evaluation of artworks freed from the aura generated by their immediate history. At the same time, the selected artworks call forth multiple possibilities of reconstructing their historical context. Expanding beyond the usual exhibition area, the presentation makes use of the atmosphere and signifying potential of the gallery’s annex spaces such as the lobby, the depot, the hall and the studio.

Though it might keep a low profile in this show, history is however present. As the exhibition’s title suggests, it “comes knocking”, thus signalling the necessity of historicising the art product from a perspective in which the communist past ceases to retain purchase over the perception of the present.

We are pleased to annouce also curator‘s Judit Angel seminar and lecture in the framework of the Free School for Art Theory and Practice initiated by tranzit.hu, on December 4, 2010:
Around the Context: Questions of positioning, interpretation, translation and re-evaluation

The closed seminar takes place between 11 a.m. and 4 p.m. at Galeria Plan B, the public lecture at Uqbar (Schwedenstr. 16, 13357 Berlin) at 7 p.m. To take part in the seminar see information at: http://hu.tranzit.org/en/free_school/

For further information please contact the gallery at +49.172.3210711  or [email protected]
With the support of the Romanian Cultural Institute in Berlin.