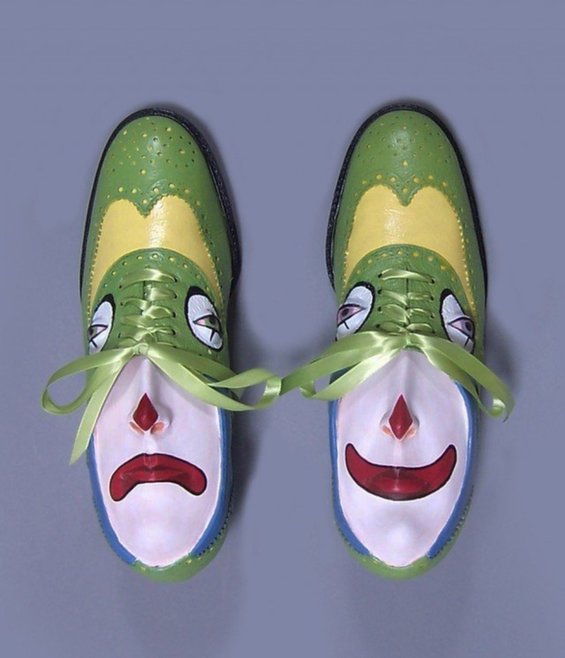 For her wildly imaginative series Foot Fetish, the artist Gwen Murphy creates shoes with carefully rendered faces. Her sculptures range from the humorous to the frightful, from high end footwear to more casual designs. Murphy’s lifelike characters blend seamlessly into the shoes they inhabit, recontextualizing well-worn Converse One Stars, pumps, and ballet flats. Here, footwear ceases to be a passive participant in our daily lives, waiting patiently for our feet; instead, shoes become fantastical creatures with lives of their own.

Murphy’s uncanny creations draw from pop culture and folklore alike. “Planet of the Sneakers,” is a clever yet earnest adaptation of the 1968 film “Planet of the Apes.” Celebrity fortune teller phenomenon Madame Zora makes an appearance in a pair of glittery pink kitten heels, and one-eyed Waldgeist, Germanic forest spirits, nestle amiably in a pair slippers. “Guardians of the Basilisk” places a pair of austere women in faux snake skin pumps; unlike the victims of the serpentine creature, who can kill simply by meeting a mortal’s gaze, they stare upwards, their eyes unfazed. “Judith,” a piece made from a pair of T-strap pumps, might be imagined as the biblical heroine; like the Jewish woman who slayed Holofernes, she is shown both as resolute (left shoe) and as gravely apprehensive, her eyes darting back and forth (right shoe).

With Foot Fetish, Murphy elegantly inverts our expectations, placing the face and head where the feet should be. Her shoes, no longer able to serve the purpose for which they were designed, take on new life. In this off-beat, upside-down realm, are delightful moments where the magical and practical collide. (via Agonistica) 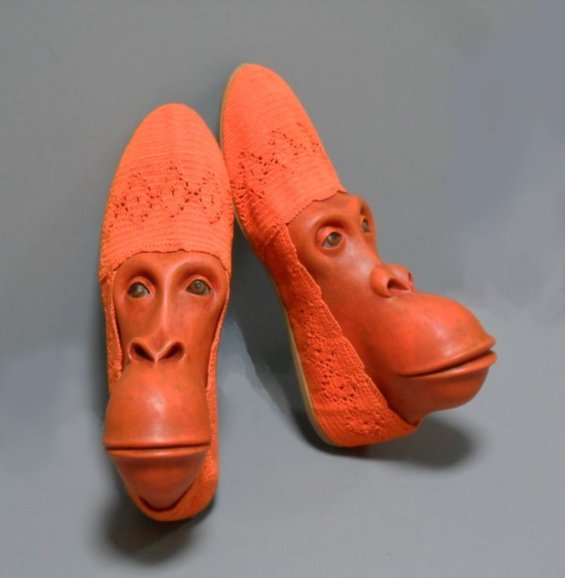 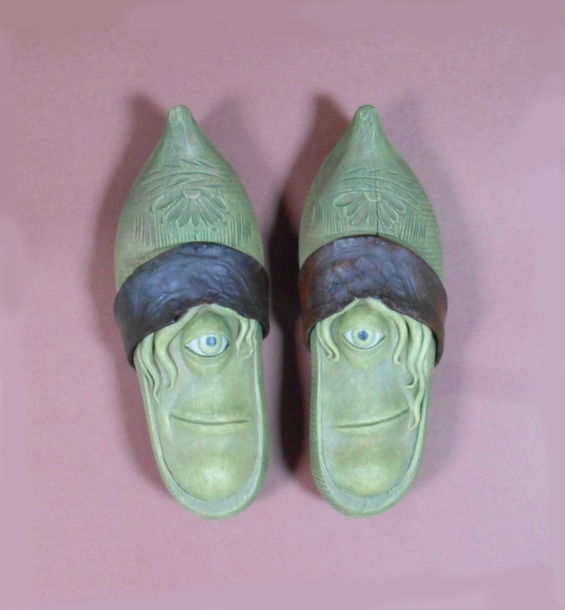 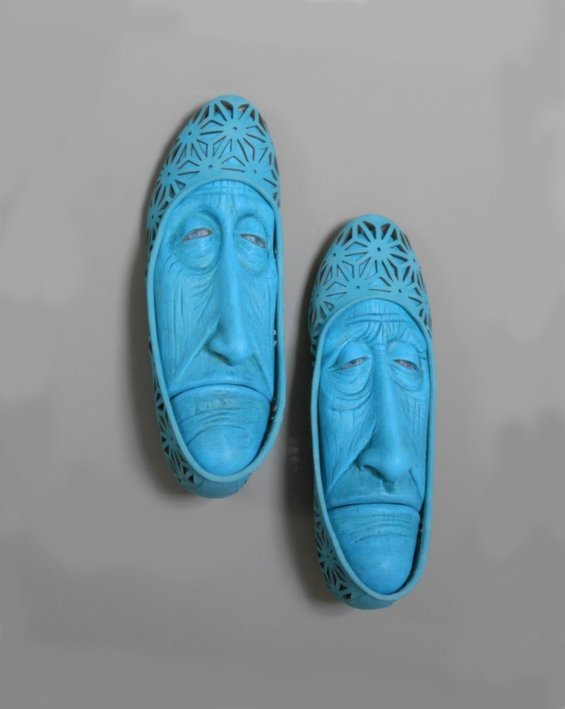 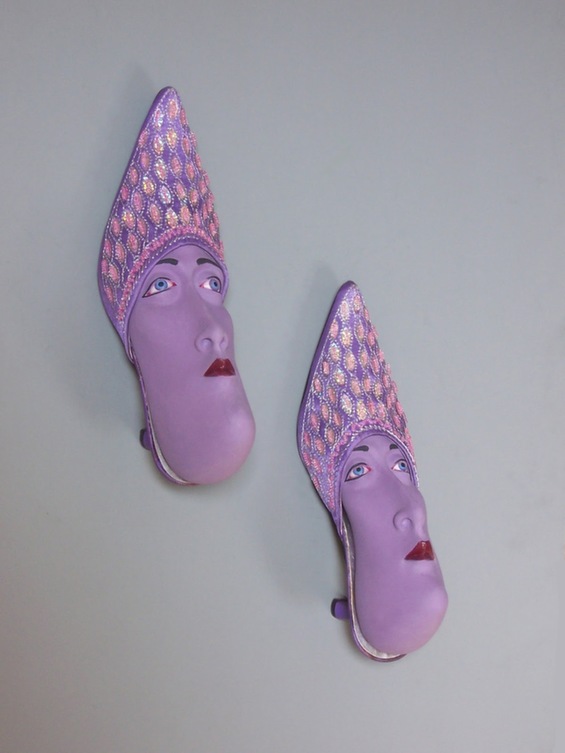 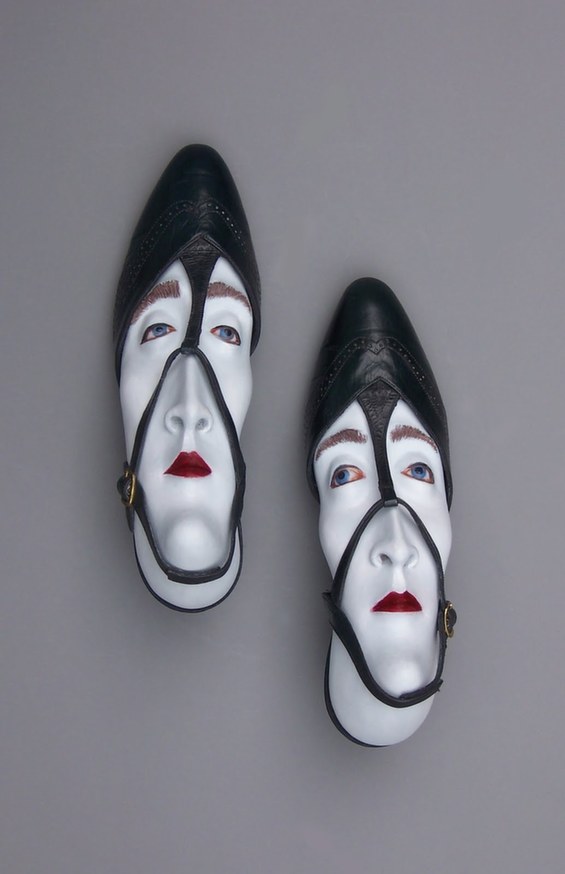 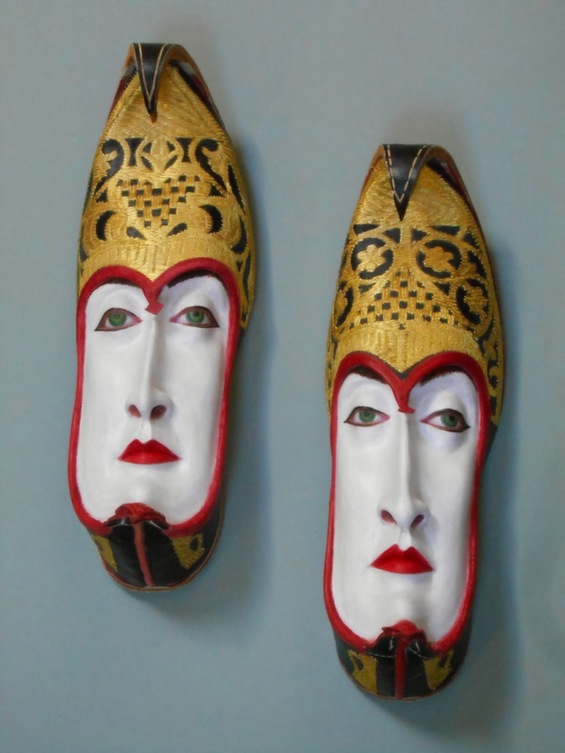 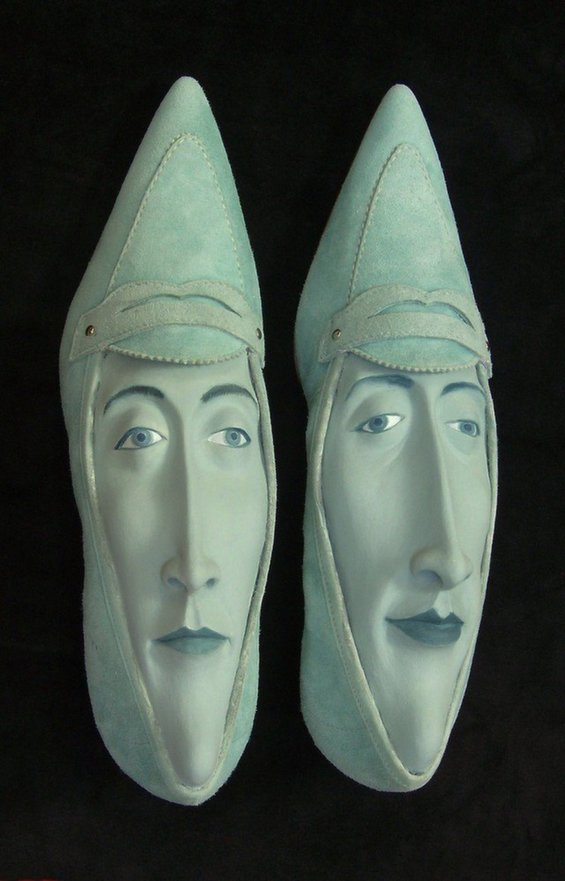 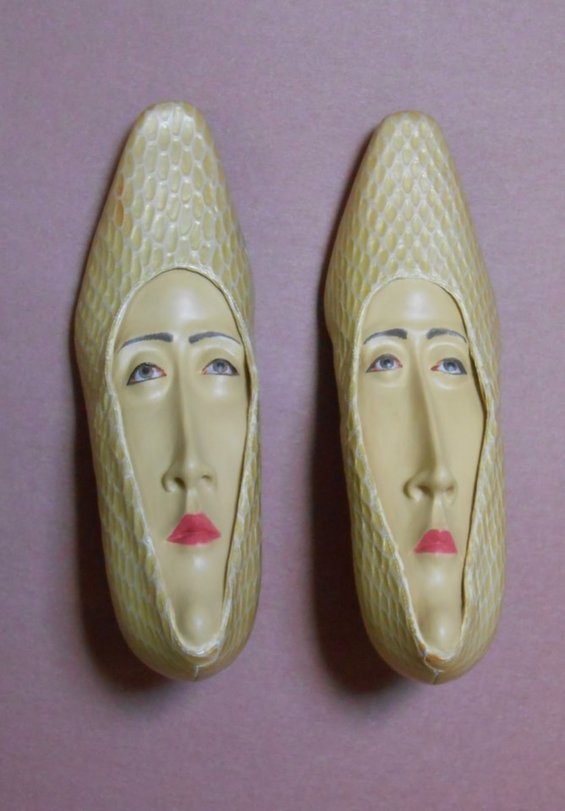 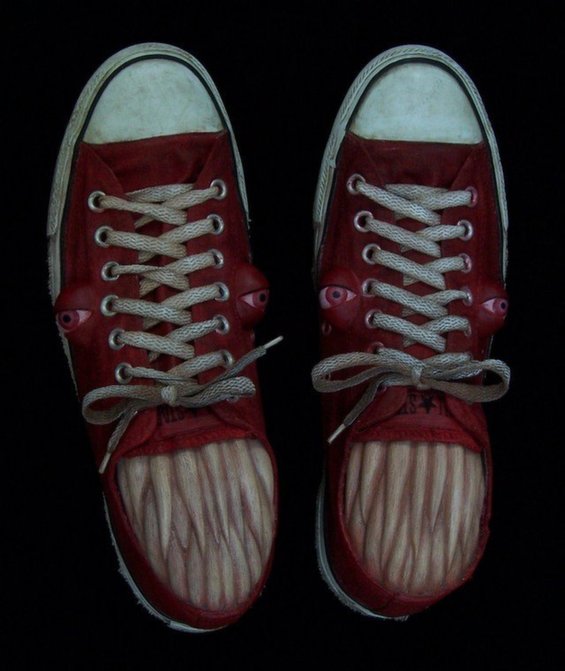 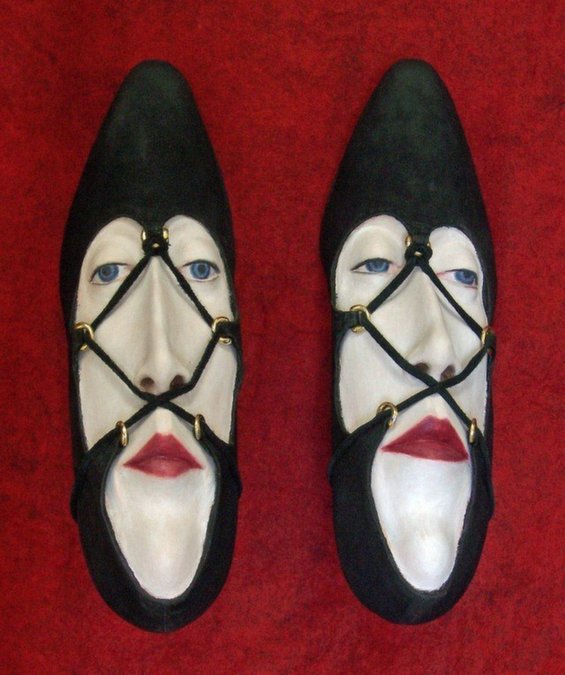 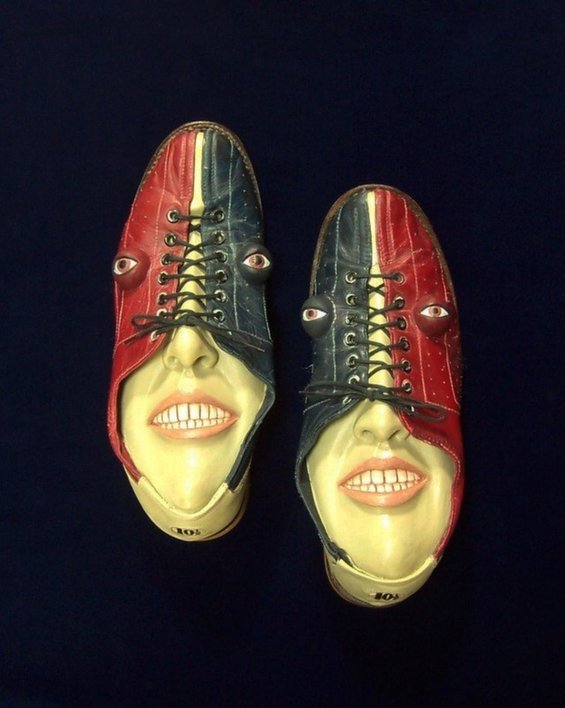 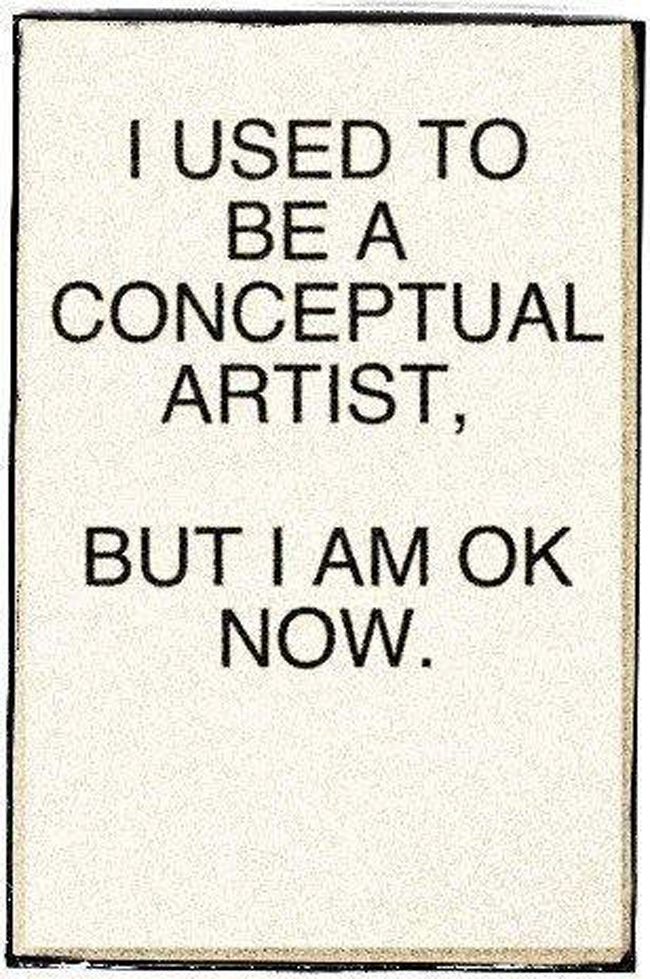 I used to be a conceptual artist, but I am OK now. 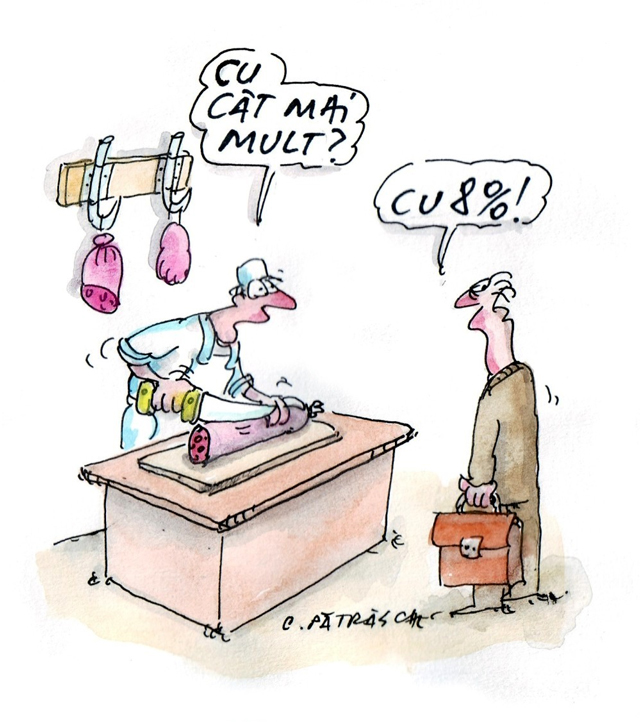