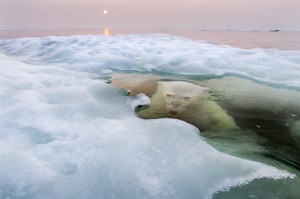 A polar bear peers up from beneath the melting sea ice on Hudson Bay as the setting midnight sun glows red from the smoke of distant fires during a record-breaking spell of hot weather. The Manitoba population of polar bears, the southernmost in the world, is particularly threatened by a warming climate and reduced sea ice.