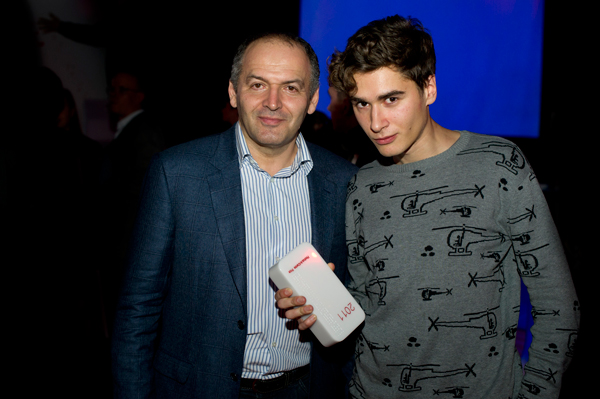 Victor Pinchuk, founder of the PinchukArtCentre, and Mykyta Kadan, The winner of the Main Prize

The winner of the Main Prize becomes Mykyta Kadan for his work “Pedestal. The Practice of Exclusion”. The finalist has been awarded UAH 100 thousand and one month residence in a studio of an internationally renowned artist. Additionally, Mykyta is automatically included in the short list of the Future Generation Art
Prize – international prize for young artists. 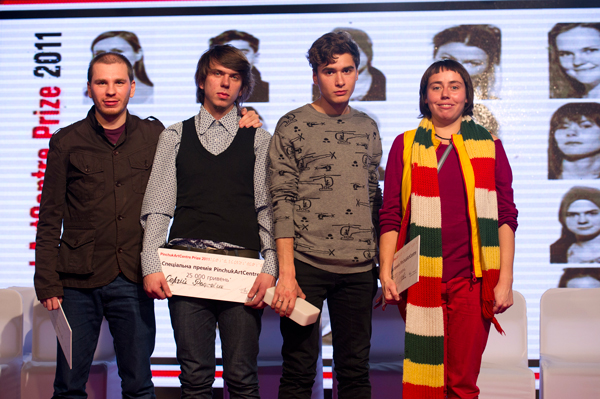 The international jury members Hans Ulrich Obrist, co-director Serpentine Gallery (United Kingdom), and Ekaterina Degot, professor at Moscow Alexander Rodchenko school of photography and new media (Russia), presented the top award to the winner. They said: “The jury was unanimous in judging this the best piece in the exhibition.  We admired the clarity of his ideas and the way they were executed in subtle, spatial terms. This  non-nostalgic, anti-monument reflects on the nature of history and memory, while pointing to the future. It reflects on ideas of permanence and ephemerality. We liked the way the piece condenses wider ideas of the city and its current mutation and transformation:  Kiev as a city on the move.”

The first Special Prize of the PinchukArtCentre Prize 2011 went to
Zhanna Kadyrova and the second Special Prize was awarded to
Serhiy Radkevych. The laureates receive UAH 25 thousand each and one month residence in a studio of one of the world’s leading artists.

For the PinchukArtCentre exhibition Kadyrova continued the transformation of found objects or situations, radically cutting found pieces of fractured road asphalt and presenting them as paintings in the gallery, or placing an asphalt sphere next to the entrance to the art centre.

Presenting the award to Zhanna, Kate Bush, Head of Art Galleries Barbican (United Kingdom), stated: “The jury found consistent development in Zhanna Kadyrova’s body of sculpture. We particularly appreciated the relationship between inside and outside in her practice: the way that the pieces are positioned equally well in public space and gallery space, thereby questioning the traditional demarcation of public art and gallery art. We found her works tactile and expressive. We respected her wider project which seems to us to involve complex ideas about the relationship between city, art and architecture, and a rich investigation of cartography.”

Marc Olivier Wahler, Director of Palais de Tokyo (France): “The jury were excited and surprised by Serhiy’s juxtaposition of religious iconography with the language and form of street art. The artist succeeds in developing an extremely contemporary language based on fragments of the past. On an aesthetic level, we considered his exhibited work beautifully integrated into the context and history of the market hall. We admired it’s mingling of figuration and abstraction, modernity and tradition, in a vivid public setting. Radkevich continually seeks interesting settings for his interventions whether in urban or landscape contexts.”

The Public Choice Prize of UAH 10 000 went to Mykyta Shalennyi for his series of works “Loneliness” with a blow-up doll and a clown as main actors who emphasise the idea of loneliness and anonymity within society.

The winner of this Prize was chosen based on the results of voting by the PinchukArtCentre visitors held during the exhibition of 20 shortlisted artists from October 27 to December 4, 2011. Pavlo Makov presented the award to the winner.

The PinchukArtCentre Prize 2011 exhibition will be open until January 8, 2012.

Additionally, you can find video profiles of the winners here: http://pinchukartcentre.org/en/photo_and_video/video/16754

The winner of the Main Prize of the PinchukArtCentre

Born on November 26, 1982, in Kyiv. In 2007 graduated from the National Academy of Art and Architecture in Kyiv. He studied at the studio of Professor M.A. Storozhenko. Since 2004 is a member of artistic groups R.E.P. Since 2008 he is a member of curatorial association Hudrada. Painter, graphic artist, author of objects and installations, works in the urban public environment. Co-curator (within R.E.P. and Hudrada) of exhibitions. He lives in Kyiv. Nominated for the PinchukArtCentre Prize in 2009.

The winner the first Special Prize of the PinchukArtCentre Prize 2011

The winner the second Special Prize of the PinchukArtCentre Prize 2011

Born on November 1, 1987 in Lutsk. Graduated from Lviv National Academy of Arts, Department of Painting. Was part of the team creating a mosaic mural at the Church of Nativity in Lviv. Has been engaged in Street Art for more than seven years. Resides in Lutsk.

2010 – BLACK CIRKLE FESTIVAL (organizer and participant of the street art festival in the town of Poninka);

The winner of the Public Choice Prize

Born on April 18, 1982 in Dnipropetrovsk. Graduated from the Prydniprovska State Academy of Civil Engineering and Architecture, Department of Architecture. He took part in a number of architectural competitions and art exhibitions at the Academy. Worked as a lecturer of the Academy and as an architect. Resides in Dnepropetrovsk.

Samsung Smart TV – Technical Partner of the exhibition of the 20 artists shortlisted for the PinchukArtCentre Prize 2011.

Sex (here and below is data based on individual applications):

The total number of works submitted for consideration: circa 5 000

PinchukArtCentre Prize is the first private nationwide art prize in Ukraine, which objective is to support and develop a new generation of young Ukrainian artists working in contemporary art.

According to the Prize regulations, Ukrainian citizens aged 16-35 may apply for the competition. Within a set period of time, an artist or a group of artists may submit 3 to 7 works, suggesting the one that, in their opinion, might be shortlisted for the exhibition.  The PinchukArtCentre Prize is to be awarded to the best Ukrainian artists every odd year starting from 2009.

Winners of the first edition of the PinchukArtCentre Prize were selected in December 2009. Artem Volokitin won the Main PinchukArtCentre Prize and Oleksii Salmanov and Masha Shubina became the winners of two Special Prizes. In addition to the cash prizes, the finalists took part in studio residences of the internationally renowned artists: Artem Volokitin and Masha Shubina trained in the studio of Antony Gormley in London and Oleksii Salmanov in the studio of Olafur Eliasson in Berlin.

Also, the works by Artem Volokitin were presented at the exhibition of 21 artists shortlisted for the Future Generation Art Prize 2010. Artem Volokitin was included in the shortlists of this international art prize for young artists as a winner of the Main PinchukArtCentre Prize 2009 and the Future Generation Art [email protected] project at the 54th International Art Exhibition – la Biennale di Venezia.

PinchukArtCentre is the largest and most dynamic private contemporary art centre in Central and Eastern Europe. It is dedicated to fostering artistic education, creation and appreciation in Ukraine. The PinchukArtCentre is a leading international centre for contemporary 21st-century art. It provides a sustainable contribution to the cultural participation and emancipation of Ukrainian art and society. And it gives a significant contribution to the cultural dialogue between East and West, and between national identity and international challenge. 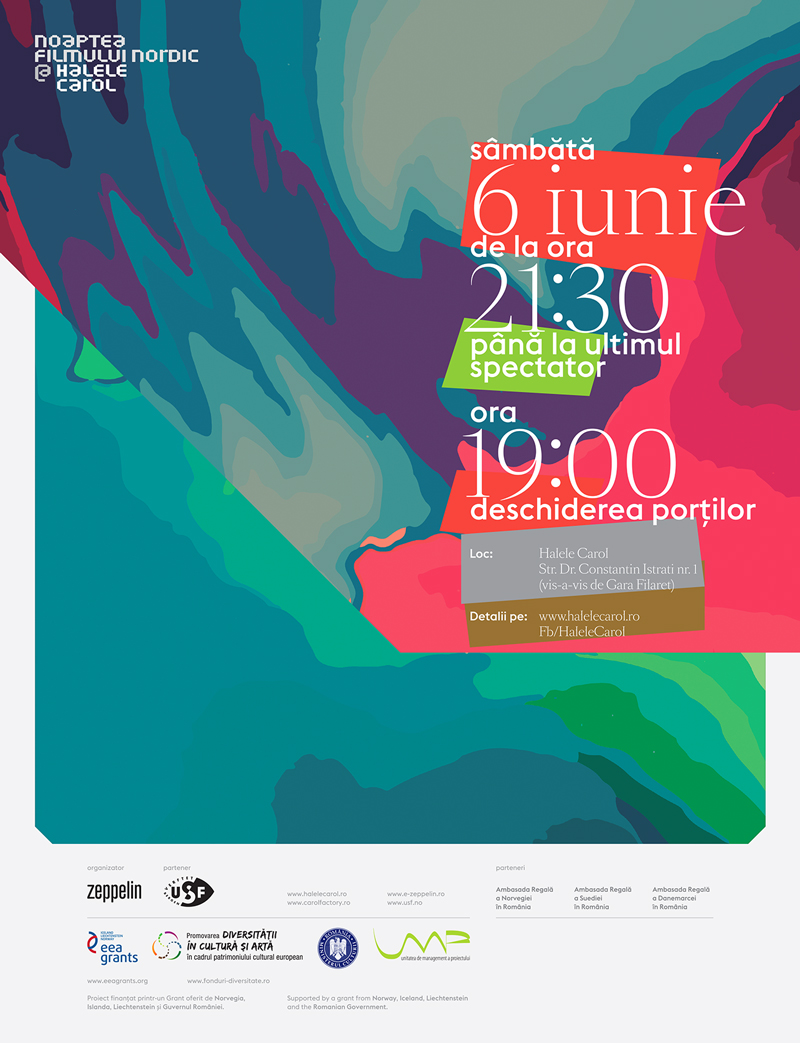 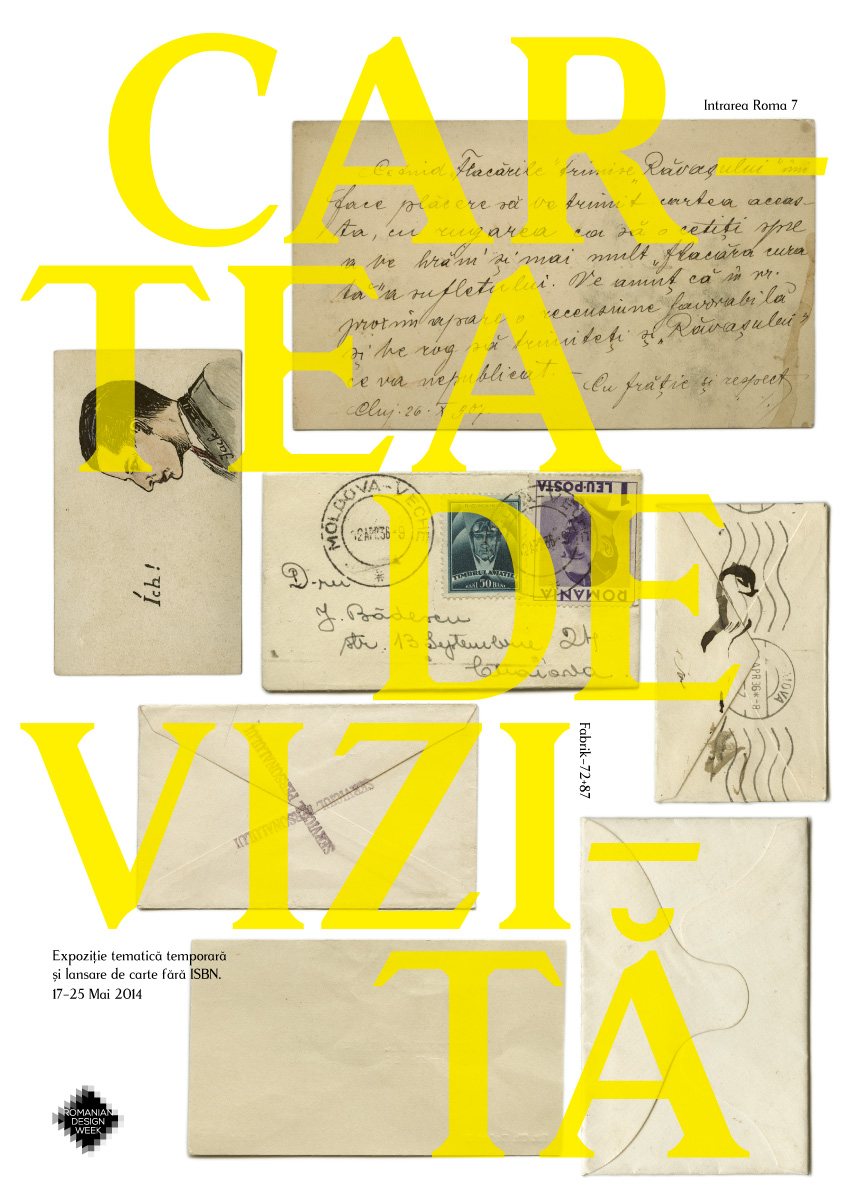 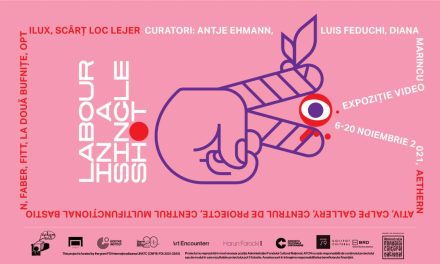